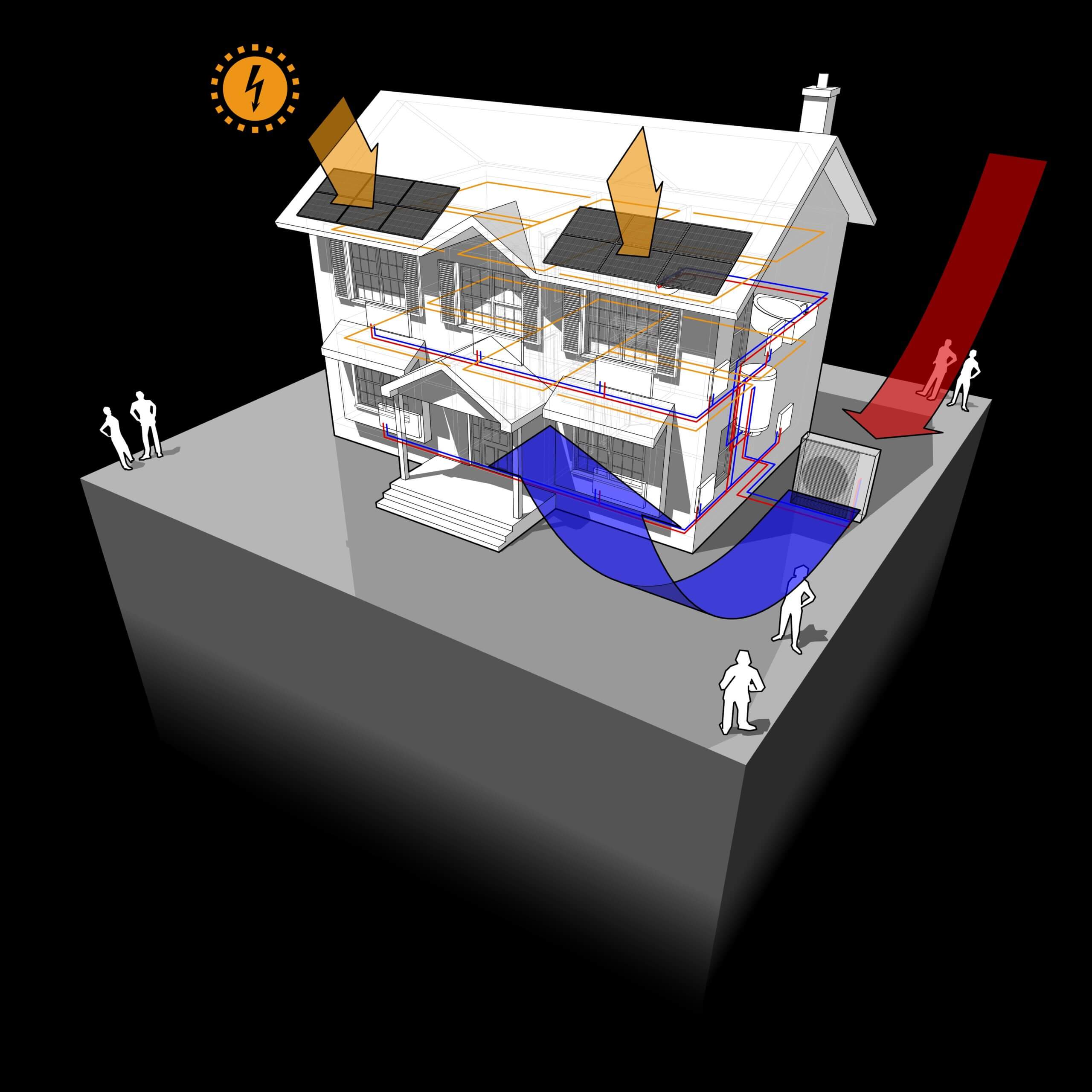 Today, more households than ever before are looking at how they can reduce their reliance on fossil fuels and make their homes more environmentally friendly. Renewable energy systems such as solar PV and heat pumps are becoming increasingly popular as people consider ways, they can shrink their carbon footprint, save money on their energy bills and be less reliant on the National Grid.

Due to far greater awareness of climate change and the need to lower carbon emissions the UK government has announced that all new homes will be banned from installing gas and oil boilers by 2025. It looks likely that the government will extend this to include a total ban on the installation of gas and oil boilers sooner rather than later making this a good time for homeowners to think about alternative heating solutions.

How Much Electricity Do Heat Pumps Use?

Heat pumps operate by transferring heat from one location to another. Air source heat pumps absorb heat from the outside air to heat your home and hot water whereas ground source heat pumps use pipes that are buried in the garden to extract heat from the ground.  A heat pump consumes a small amount of energy relative to its output when compared to a boiler. Depending on the Coefficient of Performance (CoP) of the heat pump, they can achieve efficiency rates of 200-600%, as the amount of heat output is significantly greater than their electricity input per unit of energy.

Heat pumps are widely regarded to be one of the most energy-efficient ways to heat a home though the actual amount of electricity a heat pump will need to work properly depends on several different factors.

If the cost of your electricity is around 14.0p per KwH, your heat pump’s running costs could be around £560 annually which probably doesn’t sound very different to your gas bills. According to Ofgem the average household spends around £636 on natural gas each year.

Can you run a heat pump on solar?

Solar energy is one of the most efficient ways to produce electricity. Solar photovoltaic (PV) systems convert energy from the sun into electricity. This renewable electricity source can be used to help power your heat pump, reducing your need for electricity from the grid that is mostly created by burning fossil fuels. The other type of solar energy is solar thermal which uses heat from the sun to warm your hot water and this can help reduce the electrical energy required by the heat pump to meet your needs.

Solar panels systems are generally sized in kilowatts. This measurement is a guide to the amount of power that is produced by the panels per hour when the sun is at it’s strongest. On average most systems are around 3 to 4 kW which reflects the maximum output that can be produced on a very clear and sunny day.  The figure will be less if it’s cloudy or during early mornings and evenings when the sun is at its weakest. A 4kW system will generate around 3,400 kWh per year and will take up around 26 m2 of roof space.

If you take into consideration that the average UK home uses approximately 3,700 kWh per year it is evident that a 4kW solar panel system should almost provide all the electricity you need. Only a small percentage would need to be used from the grid.

You might conclude from this that the combination of solar PV and heat pumps would work so well together with solar PV covering all or most of the heat pump’s electrical requirements that it would provide almost free heating.

However, most homes today are still using a gas boiler to provide heating and hot water meaning their gas consumption is higher and electricity usage lower. If you replace the gas boiler with a heat pump your electricity usage will go up considerably. Even if you have a very efficient heat pump with a CoP of 4 it will use around 3,000 kWh per year.

While solar panels should be able to produce most, if not all, of the electricity that you need to heat your home and water it is unlikely that they will be able to power both your heat pump and other appliances without help from the grid. Based on the figures above, the solar panels should be able to provide around 50 per cent of the electricity the household would need in total, with the remaining 50 per cent coming from the grid.

There is another problem that we haven’t yet mentioned and that is the fact that solar PV panels produce less electricity at the time of year when heating and hot water demands are at their highest. Added to that, the time of day that solar PV produces any excess energy is during the day which does not follow the typical timings of a heating system.

Solar PV panels will have less impact on the running of a heat pump during the cold and dark months. During the summer heat pumps do little more than heat hot water though with correct control timings and adequately sized hot water cylinders, this can be maximised to provide almost free hot water 3-4 months of the year.

To make the most of the energy generated by your solar panels, adding a battery into the home setup is the answer, so that any excess energy generated by your solar panels is stored in the battery for use when the electricity demand exceeds the generation which will further help increase a property’s grid independence. The energy stored in the battery will help to power your heat pump and home appliances when it is needed.

Despite the initial outlay, there is still a very strong argument as well as financial benefit to installing, heat pumps, solar panels and batteries.

By The Renewable Energy Hub

Is Internal wall insulation worth it?

Don’t leave Wales behind in the Green Industrial Revolution